Took a while for me to install and care really needs to be given to the joint screws because if you tamper with it too much, it will chip. but overall, its sturdy and able to hold 2x W270 PRO if you are thinking of purchasing everything from prism.

Easy to install and works great with my prism+ monitor! Range of movement is good and overall feels very high quality! 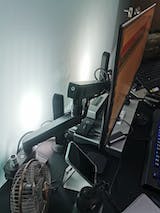 Love the USB port on the table clamp, great for minimalist setup

N
N.
Value for money, good angles unlike other arms

The main reason why I bought this arm was not the price. Honestly, you can find similarly priced arms on Shopee or Lazada; brands like NB are quite cheap too, however the arm mechanism is where this stands out.
If you take notice, a lot of monitor arms for Dual screens have a straight bar up the centre, before it splits left and right. What annoys me is that with the bar in the center, you cant turn the screen towards the center without it hitting the bar. So it's not really 360 degrees. While you might not often encounter such issues when you have two screen at 10-15 degrees tilt towards the center, it is good to take note of such issues. You never know when you need to pivot the other screen! Especially during circuit breaker! As seen in my picture, now we have two people being able to use the screens, instead of just one person using two screen. Hope you get what I mean. Just take note of the awkward angles that you might requires such a mechanism.

This monitor arm is absolutely amazing as it is able to hold both my prism x340 and x270 with ease. The adjustments can be easily made and you can hold your monitors up in any configuration whatsoever. Installation is easy as well. Bang for buck! 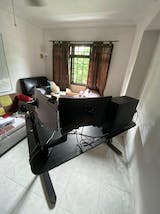 123
Back to Monitor Arms
65 reviews
Spin to win