Initially, I was sceptical on it as I was deciding on whether getting the Stealth one instead. But upon usage, Lite also work as intended though may not be as sleek as the Stealth one and without the USB Adapters. The cable management also works great on consolidating the cables together though it could’ve been improved by slotting cables inside the arm hence the cables are hidden. Also, unlike Stealth, the VESA adapter is attached to the unit itself hence it could take a while to screw the monitor to the monitor arm. Nevertheless, I am happy with the purchase of Lite monitor arm to support my monitor. As it serves its purpose well for $69 (on sale) it is so value for money lorh. 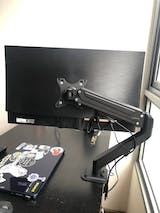 Needed a monitor arm for desk against the wall. Fits perfectly. Delivery was quick! Satisfied and happy 😌

Easy to set up and it holds my monitor quite well. A good amount of articulation for various monitor positions. Best of all,its very discrete.

Purchased an arm as well for my small table. Initially had trouble getting the arm to attach to the monitor securely, but the help desk was very helpful and sent me a few videos to assist. This is my first buy from the brand and also my first monitor and the experience has been great so far. Hooked up my macbook pro onto the monitor (Usb C to HDMI cable) and it is a very seamless experience every time I open up my Mac. 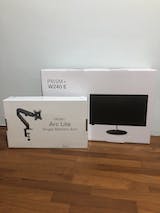 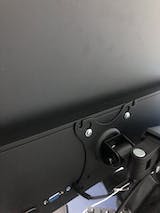 A must have if you dread having holes in the wall just to wall mount your monitor to allow it as an extended screen for usage of your laptop.
Arc Lite is especially good if you have little clearance between your wall and table.
Best decision I have made this year!